After sighting a flock of Snow Geese in March 2017, I have been thinking about how to capture the migration of Snow Geese in wool. Last week, I finally sat down and knit up a hat in the species’ honor.

The simple triangle motif based on quilters’ flying geese is knit in black, gray, and white to resemble Snow Geese flight feathers, and the three repeats form subtle V shapes to imply movement.

This hat is now winging its way to my uncle in Pennsylvania in time for winter. 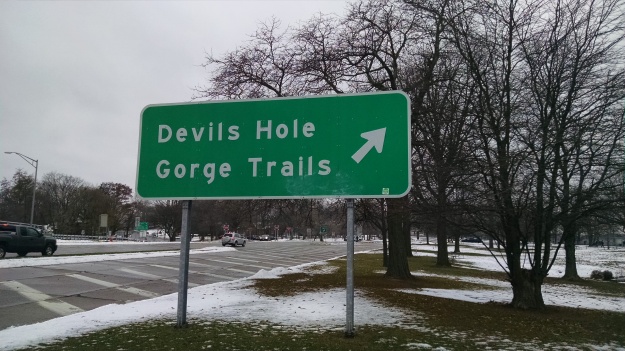 This weekend, I visited the beautiful Niagara Gorge – another Wilderness Weekend in Western New York (see previous post for more information on WWWNY).

The Gorge can be accessed by a number of stairways on the American side. Some of the stairways are newer and smoother than others, but they are all steep and slippery in the snow. I chose to descend into the Gorge from Devil’s Hole State Park.

The stairs end at the Great Gorge Railway Trail.

This Trail is the former route of a rail line, which gave scenic tours from 1895 to 1935. Having a railway run along the steep slopes of the ecologically sensitive Niagara Gorge was never the best idea. Fortunately, land slides took out part of the route in September 1935, and it was never repaired.

The highlight of my walk along the rail-to-trail was this wonderful gull gathering:

The gulls, mostly Bonaparte’s and Ring-billed, took off when I came closer… 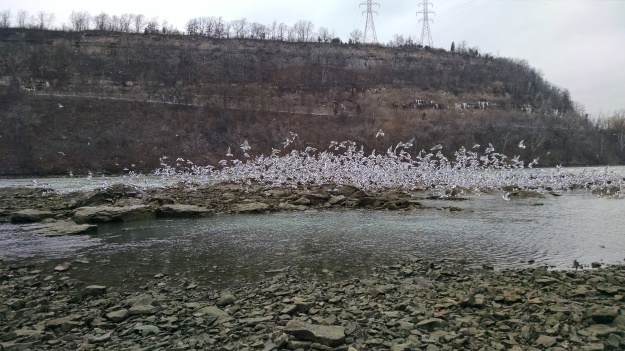 …and then quickly resettled on their rocks.

Most visitors to Niagara Falls do not know about the Gorge Trails, which is really a shame. I tell everyone that I know about them!